Wristbands and ribbons make life so much better In the 1990s, wristbands bearing the letters WWJD became popular among evangelical Christians in the US. The bracelets served as a reminder of their faith, prompting them to ask the question “What Would Jesus Do?” when making decisions.

Over the years there have, naturally, been a number of variations put forward by wags and cynics around the world, “Wat Wil Jy Drink?” being a good recent example of local extraction.

In the first decade of the 21st century – a.k.a. the noughties, a.k.a. The Decade Of The Rubber Bracelet – everyone was wearing a wristband to show their support for something or other. Lance Armstrong. Gay Pride. Best Friends. Ninja Turtles. Etc. These bands replaced (or accessorised) the common-or-garden ribbon, the red ribbon having been made popular by Elizabeth Taylor as sign of solidarity for people living with HIV/Aids. The ribbon, of course, has been used in a variety of colours to support many other causes – including awareness around issues of breast cancer, suicide, heart disease, education, religious tolerance, selective mutism, ADHD … but I digress.

The wristband, the ribbon … these are symbols of our empathy for and commitment to causes or institutions. But what if you could make your own? What if you could make a bracelet or a ribbon or a flipchart or dice or a mouse pad, or whatever works for you, that helps you to focus on your little personal aphorisms whenever you need them? 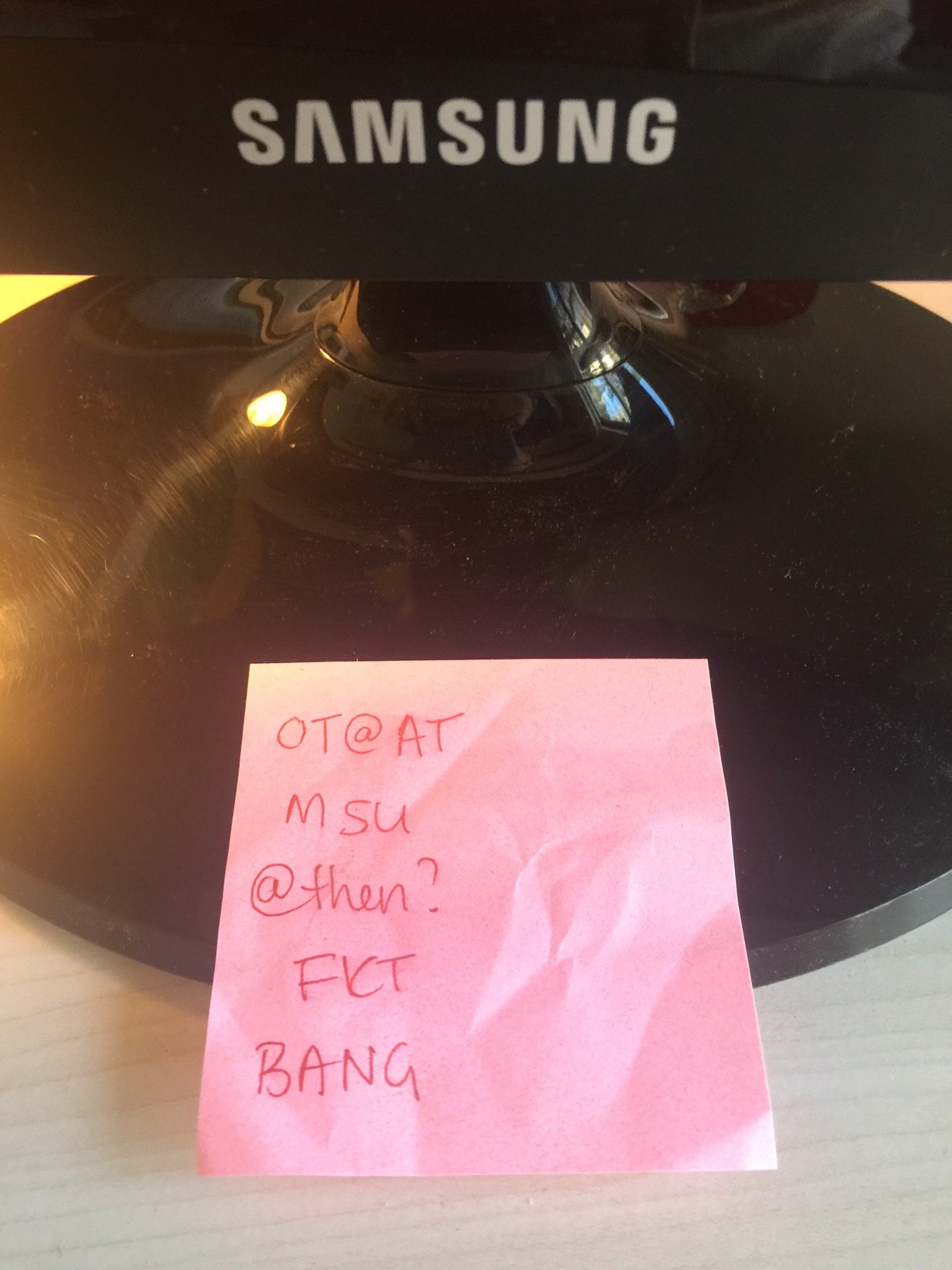 I have a tatty little Post-It note stuck on my monitor. On this Post-It is written:

These cryptic little messages could just as easily be stamped into bracelets or embossed on ribbons. If they were on yours, this is what they might remind you:

One thing at a time. This comes in particularly handy when there is a lot on the go. When you find yourself hopping from window to window on your computer, never finishing anything, have a look at your OT@AT bracelet/ribbon/Post-It. Then stop, take a breath, slowly flip through everything that’s going through your head, one flip at a time, and make a list. Then prioritise. Write a 1 next to the thing that’s most important (or urgent). Draw a circle around the 1. Proceed to 2, then 3, etc. Once you’ve prioritised your list, do number 1. Then cross it off. Then 2. And so on.

Important … close your email, put your phone on aeroplane mode, shut off your Twitter, Facebook, Instagram, and whatever else could possibly distract you. Then just do it.

Some people find it easier to make corrections than provide information. This is how we help those people: Make Something Up.

It’s a useful three-letter acronym (TLA) to bring into play when you’re waiting for someone to get back to you. Instead of sitting around getting annoyed that you don’t have what you need, make something up and send it for sign-off. Now watch what happens. More often than not you’ll get it more right than wrong.

When we were kids we went through a “why?” phase. Maybe you have kids who are in that phase right now. “Why?” “Why?” “Why?” until eventually you say “Just because!”. Truth is, we must never stop questioning – although as adults our mechanisms should be a bit more sophisticated.

Scene: You’re hesitating, reluctant to make a big decision. You know what you want to do, but you’re worried about what might happen. So you start playing it out. What if that terrible thing happens? {This is the result – your greatest fear … aaaargh!!!} But don’t stop there…. ask yourself @then? @then? @then? Eventually you’ll reach a point where you either live or die. If you die (or if someone else dies), well then you should probably make a different decision. But if you live, and everyone else lives, and no one gets hurt, then so what? By now you should have a good idea of the risks involved so your choice will be well informed.

Sometimes you’ve just got to make the decision anyway, regardless. FKT happens when the risks are low, and usually when there’s fun to be had or money to be made. So take the plunge. Just do it. Put on your FKT bracelet and dance like no one’s watching.

Be a nice guy. Or, if you prefer, be a nice gal. Or even be a nice genderneutralperson. Whoever we are, sometimes we need to be reminded what’s coming out of us – and most importantly, how it affects those around us.

If you find you’re not BANG particularly well, stop … take a breath … say, “Sorry, I’m not BANG. May I start again?” This really works very, very well. I’ve used it many times – not something to brag about necessarily, but it’s a real leveller.

P.S. My next note will be to the MS Word dictionary. Apparently “genderneutralperson” isn’t a word. What’s up with that??

Previous Money is not everything, right?
Next MAD2Run starts November off with a big jol!