11 Universities from around the country are making their way to Port Alfred to take part in the annual RMB Universities Boat Race, hosted at Halyards Hotel on Kowie River from 12th to 14th September. 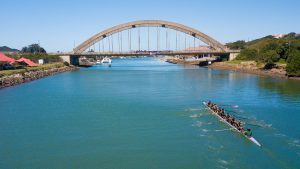 The RMB Universities’ Boat Race is a Regatta steeped in history that dates back to the 1930’s when there was a boat race between UCT and Rhodes, modelled on the prestigious Oxford and Cambridge Boat Race, the RMB Universities’ Boat Race involves the South African university rowing clubs and offers something different than the traditional 2000m Olympic style racing. The crews must navigate their eights around a variety of 90-degree corners and avoid numerous sandbanks to complete their 6 km (men) and 4 km (women) races.

Who will be taking home The Cambridge Rudder and The Isis Blade?

THE ISIS BLADE, awarded to the winning Women’s A crew, is part of an Oxford oar obtained from Oxford University Boat Club, decorated with the crests of Oxford University and that of the combined South African Universities. The Blade was presented by Martin Kennard, stroke and crew member of the Oxford crew from 1966-1968, to the winning University of the Witwatersrand Women’s crew in 1988.

Good Luck to the Athletes, Coaches, Support Crew and Clubs as they take to the Kowie River;

Bruce Viaene RMB resident rowing photographer will be capturing all the action and sharing high-res images for free downloads.

“University Rowing would like to extend its thanks and appreciation to RMB who are the title sponsor this year’s Universities’ Boat Race. RMB truly embody the ethos that is Rowing and their slogan “Thinking. Pulling. Together.” is shared by all athletes and coaches in their pursuit for success”. – Cole Barnard, Chairperson USSA Rowing President

Previous Podcast: Where to next in the world of AI?
Next SA choir encouraging Africa to dream with America’s Got Talent Final spot

Where were you at noon – Freedom Day edition

I’m off to the states for the Mandela Washington Fellowship.