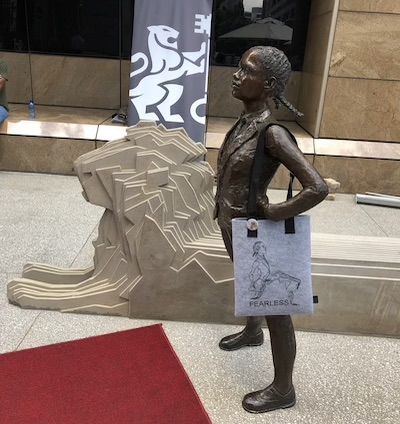 RMB’s love for the arts shows clearly in its incorporation of multiple artworks in and around its Merchant Place campus in Sandton. Art is part of the RMB DNA (which is one of the reasons we love working with the RMB team) and the bank is widely known for the support it lends to artists and the arts in general.

If you’ve crossed the Merchant Place concourse in the past few days (on the corner of Rivonia Road and Fredman Drive), you’ll have spotted a new addition to the works on display: Africa’s Fearless Girl, sculpted by Marieke Prinsloo-Rowe. She stands proud and defiant alongside a lion which, if you look carefully, has a head at each end. These heads stand in constant vigil over the comings and goings around the bank.

The lion itself is reminiscent the lion in the RMB logo.

The Fearless Girl herself, as her name implies, is unafraid. Like her counterpart on Wall Street in New York’s financial district, she is independent, courageous and strong. She is alone, save for the beast in her immediate vicinity… yet clearly unfazed by the threat the beast poses. 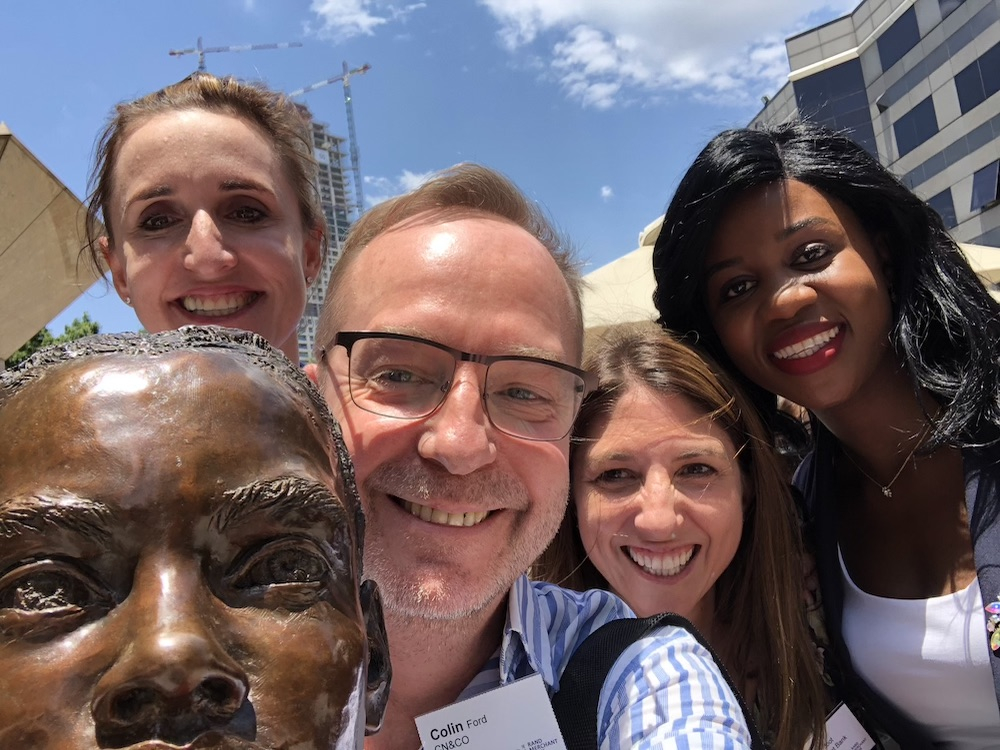 Imagine @donfrolic attending an event and not taking a #kakselfie. This one co-stars Africa’s Fearless Girl herself, as well as RMB’s Alison Badenhorst, Lucy Lightfoot and Linda Kachingwe-Sisya

So if you’re in the Sandton area, do go and spend some time with Africa’s Fearless Girl. The double-sided lion also serves as a bench, which means you can take a seat and ask the girl to whisper her secrets of bravery into your ear. You might be surprised at how she inspires you.

RMB is committed to growing the creative economy through the arts. It is the proud headline partner of the RMB Turbine Art Fair; host of the annual RMB Starlight Classics; sponsor of the Mzansi Youth Choir; BASA custodian; and proud owner of the RMB Corporate Art Collection, which comprises more than 1 500 pieces. Through these initiatives, RMB believes it is able to “co-create a powerful platform to develop and showcase young artists, elevate art-collecting across a wider market and strengthen the creative economy.”

Here’s the media release that was issued at the official launch:

In March 2017, the iconic Fearless Girl statue by Kristen Visbal took its place on Wall Street, standing defiantly and staring down New York’s bronze ‘Charging Bull’ by Arturo Di Modica. Now, in 2018, it’s time for Africa’s own Fearless Girl to take a stand.

Commissioned by RMB and created by Cape Town-based artist Marieke Prinsloo-Rowe, the artwork shows a proud and courageous African teenage girl walking alongside a contemporary concrete lion. The lion doubles up as a functional bench, and invites viewers to sit and contemplate the ideals inherent in ‘fearless femininity’.

Having been inspired by Wall Street’s Fearless Girl, RMB envisioned a life-sized and Afro-centric version of the artwork that would speak to the values of individuality, courage and strength.

After embarking on a nationwide search for female sculptors, Prinsloo-Rowe’s concept, which depicted a quintessentially African Fearless Girl walking alongside a male lion (which is a reference to the RMB brand’s ‘Lion and Key’ logo), captured this vision. The work, which debuted at the 2018 RMB Turbine Art Fair, now forms part of RMB’s Think Precinct collection and is an inspiring, functional, and engaging artwork to be enjoyed by RMB and all of its visitors.

Art captures the spirit of the time

RMB CEO James Formby explains that when RMB invests in the arts, it is also investing in the lives of young artists and communities, and contributing towards the growth of the overall creative economy. And when it comes to transformation in the workplace, art can be a leading factor in how a company and its workforce communicates.

“RMB believes that arts, culture and creativity can contribute to a strengthened economy,” explains Formby. “But more importantly, they can capture the spirit of the time, transform lives and bind together, not only hearts and souls, but entire societies and nations. Having a corporate art collection on-site helps to reflect the culture of the company in an unspoken way. For example, Africa’s Fearless Girl expresses how diversity and gender equality are valued and embraced. Our people and clients have always had easy access to the palpable energy that original creativity exudes. Artworks are generously displayed across workspaces and our newly refurbished Think Precinct hosts our most extraordinary sculptures in one central, outdoor area, for all to engage.”

RMB’s Athena initiative: Towards equality in the workplace

Africa’s Fearless Girl complements the brand’s gender equality initiative Athena, first launched in 2015. Through the Athena initiative, RMB works towards creating an environment where women feel they are empowered to achieve their individual career goals; and growing the number of women in leadership in financial services.

New York’s original Fearless Girl highlighted a need to change the perception of what it takes to create a successful company. This is what RMB wanted to create – but with a distinctly African narrative. Africa’s Fearless Girl takes her rightful place alongside the male lion, reiterating one of Athena’s key principles of not having to “man up” to have a successful career at RMB.

Athena is, however, not a women’s conversation. Instead it is a business imperative with the clear agenda to focus on both men and women and the collaborative diversity they offer. This makes Africa’s Fearless Girl an incredible beacon of hope to young women in Africa – encouraging them to lead in their own authentic way.

The addition of Fearless Girl to the Merchant Place campus also coincides with the international 16 Days of Activism Against Gender-Based Violence campaign. 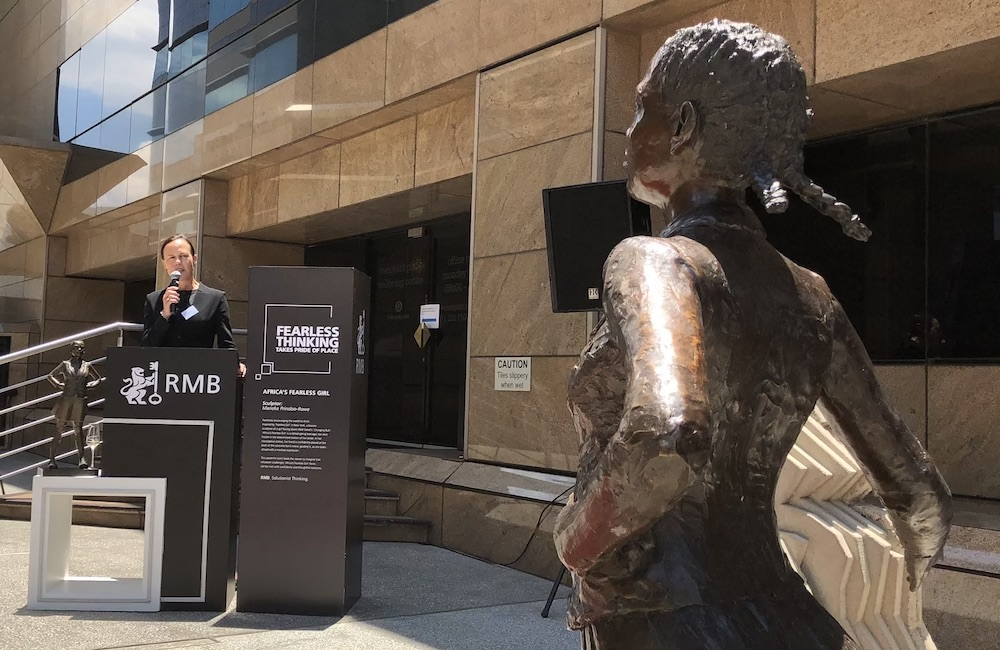 Emrie Brown facing up to the Fearless Girl

“At RMB we want to create a workplace where everyone, irrespective of gender, can thrive and achieve success in their careers,” says co-head of RMB’s Investment Banking division, Emrie Brown. “It is unbelievable how a sculpture can encapsulate so much and with such beautiful simplicity. For me, Africa’s Fearless Girl demonstrates some key characteristics for success – optimism, courage, and resilience to deal with challenges that might come her way, and focus and tenacity to pursue her goals with loads of positive energy.”

Linda Kachingwe-Sisya (pictured in the header image), who oversees RMB’s marketing portfolio for Africa, feels that ‘a woman’s place’ in society has become the narrative around women in Africa, despite them taking up leadership roles at presidential level, in parliaments and in boardrooms – alongside their traditional responsibilities at home and in the community. “Africa’s Fearless Girl is a constant reminder of the important role women play in positively influencing economies at all levels of society. RMB plans to extend her presence to some of our offices across Africa next year,” she says.

In addition to the life-size statue, RMB commissioned a limited edition of 20 maquettes, 60 cm in height, which were launched at the RMB Turbine Art Fair. Such was the appeal of the narrative that Africa’s Fearless Girl conveys, that the full edition was sold out on the first evening of the fair. Reasons to purchase ranged from personal art-collecting to acquiring gifts for “fearless” female loved ones. Particularly meaningful, was the story of the St Anne’s Diocesan College Matric class of 2018, who collectively purchased edition number 14 to present to their school at their Matric farewell ceremony. The maquette will most likely find her home in the foyer of the new theatre complex at the school, due for completion in early 2019.

RMB believes that everywhere she goes, Africa’s Fearless Girl will serve as a visual reminder of an environment where all people are encouraged to fearlessly reach their potential; at the same time taking the equality conversation into society as well.