FROM UNDER 23 WORLD CHAMPS GOLD TO SECURING QUALIFICATION FOR TOKYO 2020
The B-finals which took place on Saturday 31st August at the World Rowing Championships in Linz was an all-important race as it meant the top five boats would qualify for the Tokyo 2020 Olympic Games.
With a race that had you on the edge of your seat, Lawrence Brittain and John Smith, who in the past won gold at the Belarus U23 World Champs hosted in 2010, have qualified the Men’s Pair for Tokyo 2020.
We asked Paolo Cavalieri, ROWSA Chairman for comments on the past weeks racing in Linz; “Competition was at an all-time high standard, race finishes were very tight in the top 12, so we are very pleased under circumstances. Hard work to come, but first a well-deserved break for the next few weeks. We have all it takes for a good Tokyo 2020”. 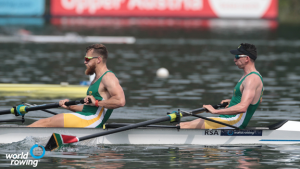 HERE’S A RECAP OF THE RACE FROM WORLD ROWING
Men’s Pair (M2-) – B-final Don’t come last! That’s what every coach and every rower must have been saying. The top five boats would qualify for the Tokyo 2020 Olympic Games. The gun went for the start with Romania and South Africa sitting in the centre lanes as the fastest times from the semifinals.

South Africa’s John Smith and Lawrence Brittain moved away the quickest at the start. Smith has an Olympic gold medalist from the lightweight four and he has successfully transitioned to the open weight class. Smith and Brittain headed the pack with Serbia and Canada the closest challengers. Then Canada’s Kai Langerfeld and Conlin McCabe did a big push moving into the second 500. Great Britain was watching and went to stroke rate of 40 as Canada got into the lead. The top four boats were separated by just two seconds with Belarus and Great Britain still close enough to strike. Belarus went to 40 with GB at 41 as they both tried to hold on to the fifth spot. Serbia was now at 46, Canada at 42. Great Britain had missed out. The Olympic qualifiers were Serbia’s Mackovic and Vasic along with Canada, South Africa, Romania, Belarus.

You can re-watch the race here:

Paolo Cavalieri ROWSA Chairman said: The competition was at an all time high standard, with very tight finishes in the top 12 on Sunday. We are pleased with the RMB National Squads results under the circumstances and delighted to have qualified the men’s heavyweight pair for the Tokyo 2020 Olympics.
Hard work to come but first a well deserved break for the next few weeks. We have all it takes for a good Tokyo 2020.

One more opportunity to qualify in May 2020.
The RMB National Squad have the potential to qualify the Lightweight Women’s Double Scull , the Men’s Four and Womens Pair in May at the 2020 FISA Final Olympic Qualifying Regatta held in Lucerne, Switzerland.

Lucy Lightfoot Head of brand and integrated marketing at Rand Merchant Bank said: RMB congratulates the pair and wishes the rest of the squad the best of luck on their journey to do the same. 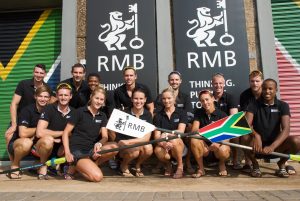 Previous TED Talk Tuesday #129: A call for all citizens, businesses and governments to take the lessons learnt to avoid #DayZero.
Next Taye Perry selected as first SA woman to ride Dakar