RMB NATIONAL SQUAD ON THEIR RECCE IN JAPAN The Oxford Dictionary for ‘Reconnaissance’ – the activity of getting information about an area for military purposes, using soldiers, planes etc. Time spent on a reconnaissance is seldom wasted.

Roger Barrow Head Coach along with RMB Senior National Squad rowers, Jake Green, John Smith, Kyle Schoonbee and Lawrence Brittain are currently on a recce in Japan. They might not be there on a military mission, using soldiers and planes, but they are certainly there on a exploratory mission with rowers, rowing boats and sculls to spend some time understanding the in’s and out’s of Japan and the Sea Forest Waterway, the venue that will host the Rowing at the Tokyo 2020 Olympic and Paralympic Games. Closely located to Tokyo, the venue will offer stunning views of the Tokyo Bay and of the Tokyo Gate Bridge to the athletes, spectators and broadcasters alike.
What are its key features?
Constructed by the Tokyo Metropolitan Government on a waterfront site, the field of play is protected from the effect of waves, currents and tides by wave absorbers and two dams.

Additional temporary seating and standing areas will be available during the Games so that the Sea Forest Waterway can host a maximum of 16,000 spectators.

Following the Tokyo 2020 Accessibility Guidelines, the venue was designed to be accessible to all, including the elderly, people with impairments, parents with infant strollers and those with guide dogs. It includes universally designed wheelchair-accessible seats in areas designed with enough height difference between the rows of seating – this will ensure that those in wheelchairs can see clearly, even if spectators in front of them stand up.
The venue also has solar panels and other state-of-the-art technology to help reducing the facility’s carbon footprint.

Most recently the Sea Forest Waterway served as a test event for the 2019 World Rowing Junior Championships in August, it was a proudly South African moment when the Junior Men’s Coxed Four took podium position and won silver medals, with Germany securing gold and China bronze. (https://www.cnandco.com/world-rowing-junior-champs/)
Following the Tokyo 2020 Games, the course will be used for international rowing and canoe competitions and will become one of the premier locations in Asia for water sports, with the aim to host multiple events annually. 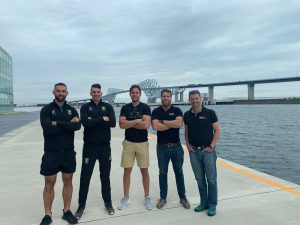 Previous Podcasts: Planning, what does it really involve?
Next TED Talk Tuesday #137: Our universe is waking up ... finally!

We <3 the creative economy