The Seventh Annual Jozi Film Festival closed on Sunday night, 30 September 2018, after a hugely successful four-day run. CN&CO has been a supporter of the festival for many years – and for many reasons!

“Art is what moves the world forward, along with the passion of people like Jozi Film Festival founder and organiser Lisa Henry and team, who against all odds make the impossible happen,” says CN&CO chief señor Carel Nolte. “Film is an incredibly emotive and important medium of expression, especially in South Africa. Film makes us cry, laugh, think, celebrate. The Jozi Film Festival not only showcases film but also our amazing city.”

The Jozi Film Festival provides a platform for filmmakers to showcase their work in an intimate and familiar environment, reaching thousands of people each year.

“We are proud to be associated with the festival and feel that this year there was a little extra something thanks to the inclusion of The Olive Tree Theatre in Alexandra as one of the venues,” concludes Carel. 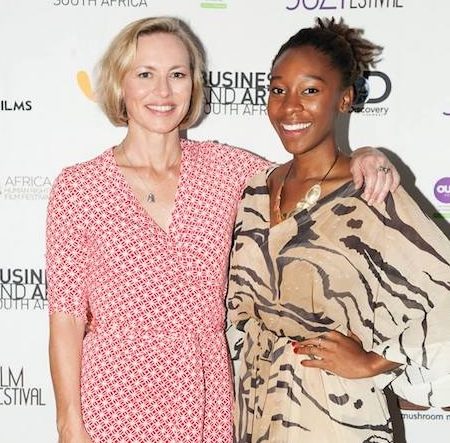 “We doubled the number of bums on seats compared to last year, which is wonderful. We are proud of each and every film we screened and thank all the filmmakers whose talent and hard work make this festival possible.”

Lisa says the month leading up to the festival is aways quite a blurry, frenetic time, so it was only the day after the festival closed that she noticed something she hadn’t previously been aware of.

“To me, filmmakers are filmmakers, regardless of their race, gender, sexual orientation, class. We are a homogenous bunch of misfits, most of the time, pursuing stories, both fictional and real, that we need to tell whether we have funding or not, a distribution deal or not. But looking back at the list of winners, I was heartened to notice that the Best SA Documentary (Whispering Truth to Power), Best SA Short Fiction Film (Mma Moeketsi), Best Student Film (Skin Diver), Best International Short Fiction Film (Kyenvu) and Discovery Channel’s Don’t Stop Wondering Award (Burning Embers) were all won by women.”

But the girl-power doesn’t stop there. The festival also screened Karin Slater’s Sisters of the Wilderness, Hannah Rafkin and Meg Robbins’s doccie In Stitches, while the award for Best International Short Documentary went to The Black Mambas, a film about SA’s all female anti-poaching unit. Food Fighter told the story of Ronni Khan, an inspirational story of one woman’s crusade against the global scandal of food waste. Bruce Donnelly with the Black Mambas

“In addition, we screened the African premiere of United Skates by Dyana Winkler and Tina Brown as well as a local feature, The Adventures of Supermama, which has a crime-fighting kung fu heroine from Alex as the film’s main character,” says Lisa. “Also, we screened films for the first time this year in at The Olive Tree Theatre in Alex, brainchild of playwright Ntshieng Mokgogo. Another festival superwoman is Sabi Mthethwa, who has been my right hand throughout. JFF 2018 wouldn’t have been what it was without her assistance.

“Having said all that, there would have been no festival at all without the involvement of CN&CO, led by Carel Nolte – an ardent Jozi Film Festival supporter since 2012. From securing funding (a very big deal) to getting our photo backdrop into an Uber from Greenside to Alex at 5pm on our opening night, everyone at CN&CO rolled up their sleeves and dug in! We owe you an enormous debt of gratitude – and Joburg does, too!” 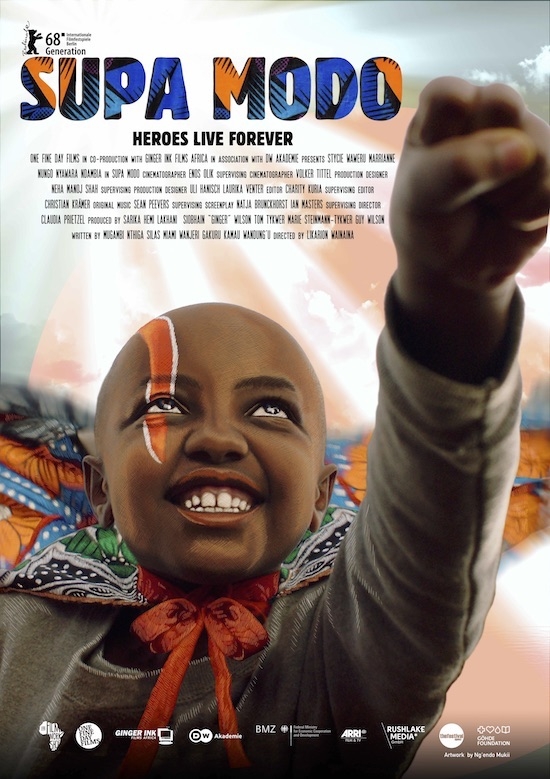 Here’s what a few other festival attendees had to say:

“Every year I make it a mission to go and watch as many movies as I can. This year my favourite was Supa Modo, the story of a young, terminally ill girl in a Kenyan village who channels her superpowers to do good in her community. It was a fantastically honest movie with beautiful characters and a surprisingly uplifting message. Although I did shed a tear or two during the film, it left me feeling incredibly uplifted.” – Colin Ford

“This year was my first time officially attending the JFF, and I am glad I did. The opening film, Whispering Truth to Power, was a reminder of issues that people are quick to forget and that for every person looking to buck the system, there is a person fighting for truth and justice at the same time. The combination of venues, variety of films on display and the closing ceremony awards really made the festival a worthwhile event and I look forward to next year’s festival.” – Rob Christian

“I loved the Jozi Film Festival. It’s so important that we support African filmmakers. The festival gives us the opportunity to see films that aren’t always screened in the big theatres, but deserve to be seen by many.” – Thabs Royds

“The quality of the films, the organisation of the festival and the passion and creativity it generates is electric. Big shout out to Lisa and her team! More South Africans need to participate and attend next year. Also, the Marabi Club in Doornfontein in the Joburg CBD – where the closing event was held – is an incredible venue. So, Joburgers, that’s TWO things to put on your must-see list, if you haven’t already: the Marabi Club and the fantastic Jozi Film Festival 2019.” – Kurt Solomon

“I attended the opening night and what an amazing evening it was! I absolutely felt at home at the Olive Tree Theatre. The location added to the whole experience. We also couldn’t have opened with a much better documentary. Whispering Truth to Power, by Shameela Seedat, was intense as we learnt more about Professor Thuli Madonsela and her time in office as our public protector. S/O to the Jozi Film Festival for giving film makers the opportunity to tell ‘our stories’ and build on South Africa’s – and Africa’s – reputation for quality and creative film making.” – Neo Matsei 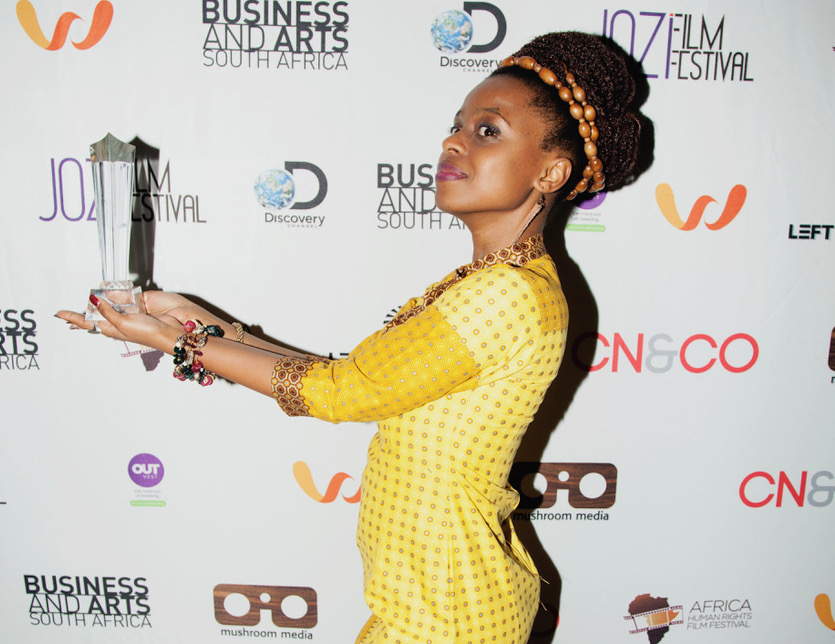 Supa Modo (Colin’s favourite film at the festival) won Audience Choice Award. The film’s director, Likarion Wainaina, sent this note, which we picked up off the Jozi Film Festival Facebook page: “Thank you Jozi for the love and appreciation. I dedicate this award to everyone who has suffered loss – may you find your smile, your joy, your hope, your dream and may you find your own Supa Modo. Asante Sana.”

“A superb venue and backdrop to an evening among the South African stars. The opening film was relevant, powerful and I thoroughly enjoyed seeing the CN&CO team there supporting with our clients and friends. Well done to the Jozi Film Festival team and all involved!” – Gianluca Tucci

See you next year at Jozi Film Festival 2019! 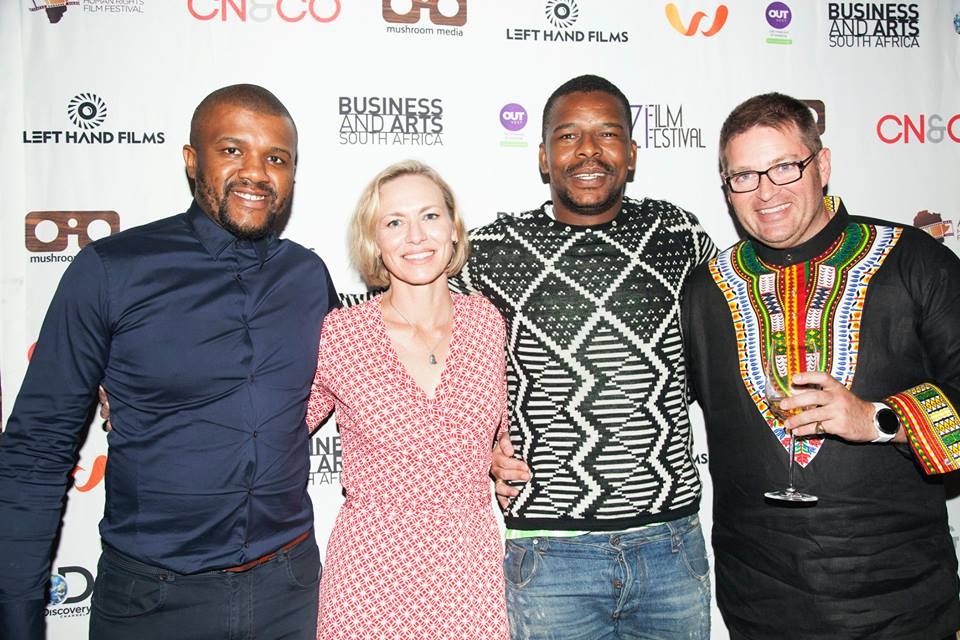 JFF Closing Awards: Sicelo from the gorgeous Marabi Club, Lisa from JFF, Lehlohonolo from Sharpeville Breweries (thank you for the beer!) and Carel from CN&CO (who has supported JFF since year one!)