A movie scenario we are all familiar with:

The brave heroine is in a public building. Desperate to escape her pursuers she triggers the fire alarm, either by pulling a handle or starting a fire in the men’s bathroom, right below a sprinkler head. Ringing bells sound off and water spurts from sprinklers in the roof, drenching the entire building. Chaos ensues and our heroine manages to evade her pursuers in the pandemonium.

Or so Hollywood would have you believe. Just take a look at another similar scene from Casino Royale 1:12 minutes into the clip below.

In truth, fire alarms and sprinkler systems don’t operate the way we see them in movies. While less dramatic, there is a far more practical reason as to why, explained here by ASIB’s managing director Natasha Goring.

“Firstly, a fire alarm doesn’t automatically set off a sprinkler system – in fact in a normal system it can’t actually trigger a sprinkler head to operate. That is because a sprinkler operates only when the heat of air around it reaches a specific temperature.” 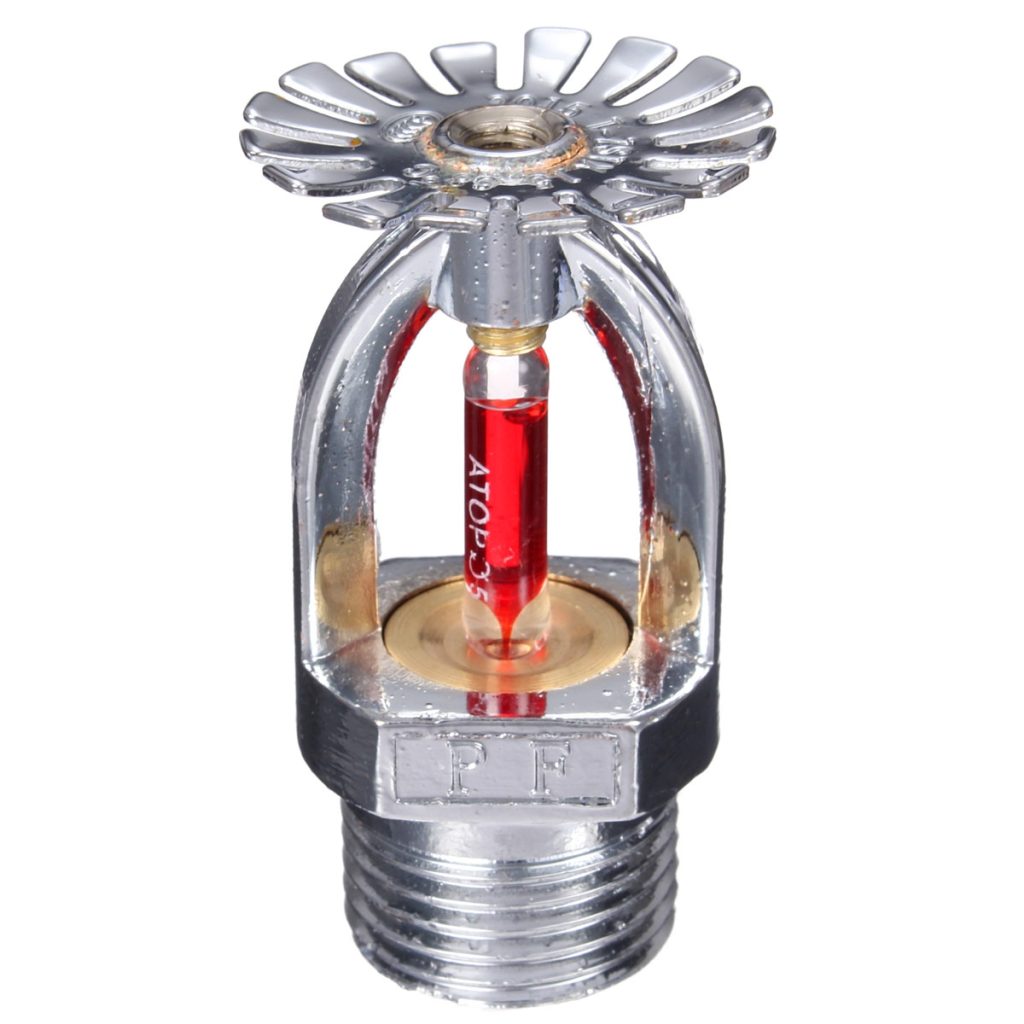 A sprinkler designed to operate at 68 degrees Celsius

Have a look at the image on the right. The bulb containing the red liquid has been constructed in such a way that when the air around it reaches 68 degrees Celsius, the liquid expands causing the bulb to burst and allowing the sprinkler to operate. Sprinklers are designed in such a way that a specific spray pattern can be achieved once the frangible element bursts. There are several different operating temperatures for sprinklers that correspond to different coloured liquids.”

Goring adds “once a sprinkler is in operation, water will continue to spray according to a predetermined pattern as long as there is pressure behind the water in the overall system. Generally, sufficient pressure results in a satisfactory spray pattern. With low pressure you will be lucky to get a dribble of water from the sprinkler head at best.”

Going back to our movie and the quick thinking heroine. Starting a fire in the bathroom would only result in that one sprinkler head operating, directly on her, as a sprinkler is designed to contain a fire in a specific area. If the fire were to spread then subsequent sprinkler heads in adjacent areas would operate when the heat in the surrounding air reaches the required temperature to burst the glass bulb.

With the above in mind, some people have asked why would you not want more sprinklers to operate just in case? The short answer is water damage – imagine an entire building with all the sprinklers operating at the same time to control a fire in one corner. The advantage of putting out a fire and saving the building would be counteracted by flooding the entire building, resulting in a different type of insurance claim for damage.

Coupled with that, the expense of replacing an entire system of sprinkler heads would compound the cost even more. So next time you see a movie, enjoy it for the dramatic flair but as always, realise that everything done by Hollywood is done to spice up the entertainment, lest the truth get in the way of a good story.