“Each of us is fascinated in our own way with spaces,” says Julia. “In Illusion/Allusion we present our personal points of view on the concept of creating, inhabiting and retreating into spaces.”

The artists have focused on creating a form of super-exhibition that’s made up of three solo installations.

“The working title for our collaboration is Solo x 3,” explains Sue. “There’s an alchemical quality to the works that allows them to be seen as separate, but together – almost like there’s some form of magic taking place as you make your way from one installation to the next.”

“I believe there is an alchemy between print and oil paintings,” she says. “I work on several paintings at any one time. The prints ignite the canvasses, the canvasses feed off each other. Inspiration for one painting might be found in another – a thread of narrative emerges.”

Julia, Sue and Sharon will be launching Illusion/Allusion on 12 September 2018 at the Gordon Institute of Business Science (GIBS) in Illovo, Johannesburg.

The official opening will be followed on subsequent days by a series of talks from the likes of Jeremy Sampson (a.k.a. The Brandfather), executive director of Brand Finance Africa and managing partner at JSCS. There will also be a by-appointment-only preview on 11 September. If you’re interested in attending the preview event, contact neo@cnandco.com. 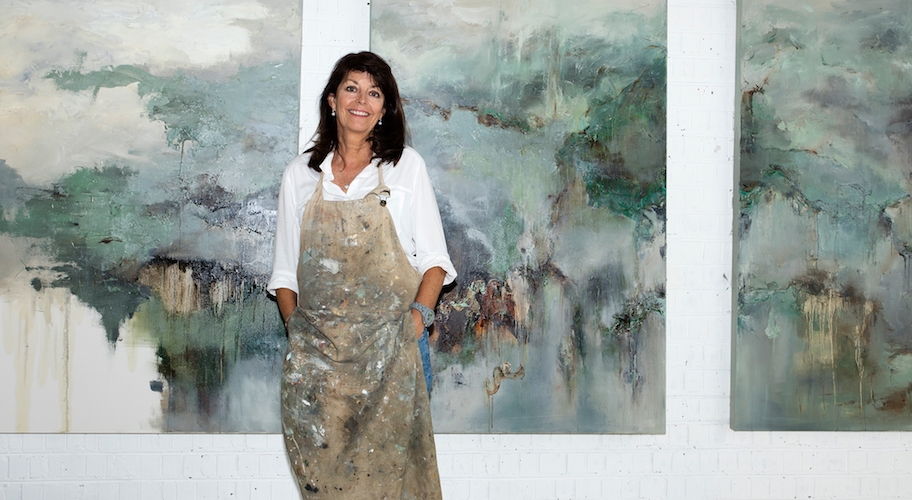 Julia Cavalieri is to a large extent a self-taught artist. Graduating with a law degree in South Africa, she spent years working in Paris in a corporate environment. It was only on her return to Johannesburg, that she moved into the art world and is now painting and sculpting full time. Julia prefers to work on large canvasses, predominantly using oils and mixed media. Exploring sculpture as a new medium, her Illusion/Allusion installation is central to her new body of work called Shadow Nests comprising clay figures encased in organic Perspex shapes. Julia’s paintings are projections of the subconscious, the allusion of a very private space – an inner nest moulded by an outside world.

“Julia paints not to make pictures, but to use paint as a poet uses words, to put before us and to invite us into, a ‘place’ of special experience.” – Ricky Burnett. Sue Martin completed her Fine Arts degree a the University of Natal Pietermaritzburg before moving to Johannesburg in the early 1980s. Her work incorporates various media, including painting, printmaking and photography. Her subject matter is fundamentally about figures within a landscape, walking or floating above, together or alone. Part of her current work, Lie of the Land, incorporates the printed word that has either been cut-and-pasted or painted onto the surface, which she sees as being as important as the image itself.  Sue’s growing passion for this process has led her to explore the spatial considerations within a painting even further, laying down words or marks and then pushing them into the distance, layering not only different surfaces but also meanings. The process is a work in progress that has its own journey, much like the people who feature so prominently in her work. 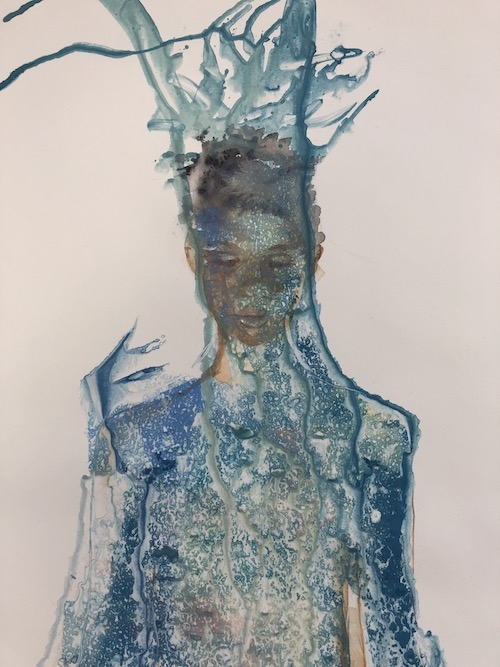 Sharon Sampson graduated in fine art and graphic design at what was then known as Natal Technikon. She subsequently embarked on an award-winning international career in advertising.

Subsequently she has specialised in oil painting and printmaking across numerous techniques. In Illusion/Allusion, Sharon’s works are presented as oil paintings and prints.

In Evocation, her most recent body of work, Sharon revisits the human form, exploring the human body’s relationship with its surroundings and space. The intermingling of lustrous inks and oils provides the perfect platform to express the ebb and flow of human relationships, encapsulating the act of bringing or recalling a feeling, memory or image to mind.

Fall nine times, get up ten / OR / AllLife, all awesome