I wish someone had told me that we all have a seat in Parliament. “I wish someone had told me” is a series of posts that feed into our inquisitive nature at CN&CO. Each week we hear from someone in our network about something interesting or surprising that’s recently happened or occurred to them – or lessons they learnt. These blogs are a way to pay it forward and form part of CN&CO’s belief that the world can be a better place – and we all have a responsibility to make it so. This week’s post is by Blake Dyason.

We all want to see change in our country but often feel like our voice cant be heard. Well I recently found out that I have a seat in Parliament and so do you.

I met Jacques Verster who works at Parliament as Public Education Practitioner at the Trialogue Business in Society Conference earlier this year where he told me that all South African can do a Parliament tour.
At first I wasn’t too interested, but while going through the process of reading each political parties promises to our country I became aware of many things I believed in and many things I felt needed challenging and wanted to know how I could share my thoughts. 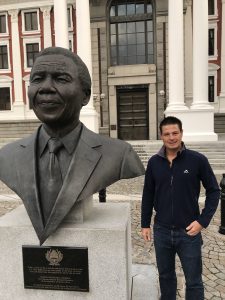 Just a week before the State of the Nation Address, I decided to take Jacques up on his offer and I was blown away.

Some of my highlights.

Standing on the stairs where our Present would walk up a red carpet to enter Parliament looking at the statue of Nelson Mandela and just realising how much history and significance these building have. 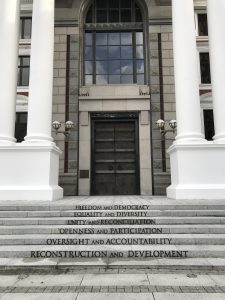 Parliament is made of 3 buildings highlighting South African history.

The National Assembly built in 1985, I really loved this building, it is timeless with its architecture and detail. This is the building we all see on TV when we watch SONA.
The Old Assembly 1910, informally known as the apartheid building. It was amazing to walk through as the architecture changed, it took me back to my history classes at school. While we were walking through this building we say MPs from the different parties gathering for a meeting.
National Council of Provinces built in 1885 is a beautiful building, built by the British, the building has big hanging lights, fine detail on the wood and tall pillars with a beautifully decorated ceiling. The chairs and stairs are smaller and the colours are very royal.

During my tour I found out that all South Africans are welcome to attend committee hearings or the report back meetings held by members of parliament. This is a place that all citizens can be involved in decision making and building a better future. Every discussion in parliament that’s open to the public has translates and every seat is setup with a headset making it possible for everyone to listen in their home language. At the end of the hearing or feedback, the relevant MPs details will be displayed on a screen for citizens to share their concerns or views.
I would encourage all South Africans that want to see a better future to get involved. Start by taking your family, friends or colleagues for a tour.

It is as easy as sending an email to book a tour or a seat at a debate and its FREE.

Book your seat for a debate HERE:

Help Mini get access to excellent education & mentorship through Bokamoso