Sani2C is the world’s biggest mountain biking stage race. The start is just a couple of hours drive from Johannesburg and it attracts cyclists from all over the country. This year Colin Ford and Michael Avery will be taking on the journey.

Our Colin Ford certainly knows how to pick a challenge when he sets his mind to it and thus when Josh Nuttall approached him to partner with Michael Avery from our partner, Classic 1027 FM, he jumped (literally) at the opportunity.

We recently had coffee (cyclists are quietly addicted to caffeine) with the #ClassicNewbies. This is the official team name for Michael and Colin, they registered for the race under it and will use it in all media posts to document this journey. We took them for coffee with the aim of asking them a few questions as they begin their journey towards the start of Sani2C later this year in May. 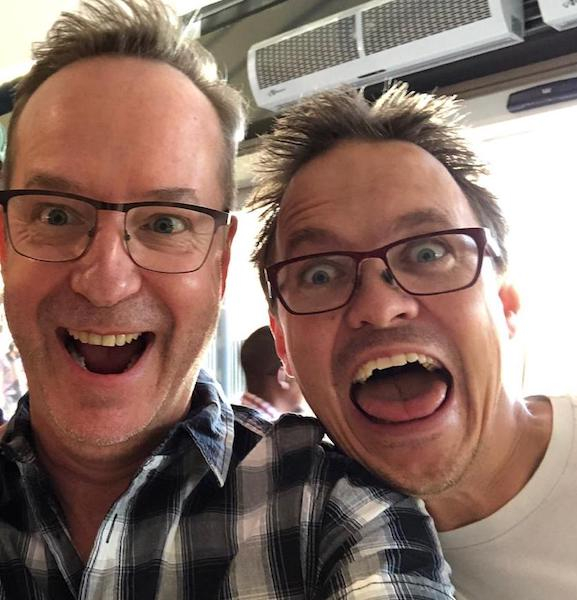 Here is a quick recap of some of the questions that we asked them. If you want to follow their build up to this epic adventure, check out their social media handles below and keep an eye-out for updates on the CN&CO handles.

-How long have you been riding a bicycle?

It’s been two months since I bought my bike and I’ve been riding just about every weekend since then. Before that I did a lot of spinning – but mountain biking is a very different experience!

-Why did you enter Sani2C?

I’ve been wanting to start mountain biking for a couple of years. When Michael was challenged to ride the Sani2C, I gladly accepted an invitation to join him. It was just the kick up the padded shorts I needed to get into the saddle.

I’m really grateful to Farmer Glen and the Sani team for the opportunity, and to Michael for agreeing to have me as his riding partner.

-Have you ever done a race of this nature before?

Not even close! I have never done any sort of mountain bike race. Or any other race, for that matter. And, by the way, I’m not viewing it as a race, but a ride. I’ll be quite happy for us to toddle along at the back, enjoy the experience and get to the end of each day chilled and unbroken.

-Are you nervous? If yes, what are you most concerned about?

Naturally I am nervous. I worry that I’m going to run out of energy at some point along the route, or crash into a ditch. But that’s why I’m training as often as I can.

-Did you know that Sani2C is the world’s biggest mountain bike stage race?

I have discovered that since entering, yes.

-What are some of the training tips that you are using to prepare?

I am putting in an hour a day on a Wattbike at the gym (Monday to Friday). Plus I go for a ride every weekend to get some saddle time in. So far the longest I’ve gone is 27 km on a very technical track at Modderfontein Reserve. I plan to ride longer and longer each week.

I’m looking forward to the Jackal Dash early next month – we’re doing the 40 km event, which should prove challenging. Hopefully there will be a few more events before the big one to get us event-ready.

-How long have you been riding a bicycle?

I’ve been riding bicycles now for 33 years with a 22-year gap somewhere in the there. I first started out on bmx’s as a child in primary school, growing up in Brackendowns in the south east of Joburg, we had plenty of greenbelt near the Rand Water property, partly for fun and partly to commute to and from school. I migrated to a mountainbike in my teens for roughly five years until I swapped two wheels for four when I started Varsity at the former RAU, now UJ, in the early 2000s. And haven’t ridden a bike since, until December 2018, when I decided to accept a challenge to ride the Sani2C from Farmer Glen – I’m still trying to figure out why exactly.

-Why did you enter Sani2C?

See question 1! When George Mallory was asked about climbing Mt Everest, his response became immortalised in the phrase, “Because it is there”, which I’ve not quite fully appreciated, until now. I accepted a challenge from Farmer Glen during an interview profiling the work the event is doing to support communities along the route, particularly supporting local under resourced schools. Not only was I taken with the philanthropic success of the Sani but the race emerged as my personal Everest.

Approaching (hurtling towards?) 40, it occurred to me that ever since leaving varsity, I’ve allowed myself to become enslaved to my laptop. And, more recently, the rigours of raising two beautiful daughters, building a career in radio and all the other nameless “things” that life throws at you, distracted me from pursuing my love of riding when I was younger and also the need to remain active to maintain a lifestyle that places increased demands on you mentally and physically. I was beginning to feel the heat generated by the early embers of burnout and what better way to respond than confronting such a seemingly daunting challenge.

-Have you ever done a race of this nature before?

-Are you nervous? If yes, what are you most concerned about?

Like a long-tailed cat in a room full of rocking chairs!

Where does one start? My fitness levels are my primary worry. Since hopping back on the bike in December I’ve loved every moment. It’s like, well, er, riding a bike, you just don’t lose that instinct. Obviously there are some technical skills I have to develop (bloody slippery tree roots!) but in the main being on the bike and in nature has filled my nostrils with pure exhilaration and enjoyment. Until the lungs start burning and the legs grow leaden that is. Clearly I have to clock some serious time on the Watt bike in the gym and combine that with regular long distance rides over the weekends. Bring it on!

-Did you know that Sani2C is the world’s biggest mountain bike stage race?

Well, yes, but only because I had to research that to interview Farmer Glenn

-What are some of the training tips that you are using to prepare?

Try not die. Partner with riding buddies who will hold you to weekend commitments.

Previous Why I went cold turkey on no social media
Next The Ink Link: The essence of the lotus flower

In the saddle: a year without a bicycle