Last year we watched in awe as the top 10 finalists in the Discovery Channel “Don’t Stop Wondering” competition were released online and then screened at the Jozi Film Festival (JFF).

“It’s amazing to experience the storytelling and filmmaking talent we have in Africa first hand,” said CN&CO’s Colin Ford. “I was completely blown away when I watched the short films online, and even more moved when I saw them on the big screen at the festival itself.”

Voting is open on the Discovery website until 7pm (CAT) on Friday, 24 August.

The seventh Jozi Film Festival takes place from 27-30 September 2018 at some fantastic soon-to-be-announced venues around the city.

CN&CO has long been a strong supporter of the JFF because we believe it’s an important event on the city calendar.

“We need a film festival to unearth talent that’s not yet been discovered; to give independent filmmakers a platform to show their work; to watch films that don’t make it onto the commercial circuit; to open our minds!!; to experience creativity; to celebrate Jozi’s energy; to have conversations and to meet interesting people,” says Colin.

And now is your chance to watch this year’s top 10 films in the 2018 instalment of the Discovery Channel “Don’t Stop Wondering” competition.

Here’s more info from the Jozi Film Festival team on this year’s top 10:

Until Friday 24 August, each film will be broadcast on Discovery Channel and it will be up to viewers to decide which film should be chosen as the overall winner. The winning film will be announced at the Jozi Film Festival in September and the filmmaker will win a Canon XF-405 video camera with Singer Manfrotto Photographic camera accessories worth over $5,800 to use for their next filming project.

“When we brought the Discovery Channel ‘Don’t Stop Wondering’ award with the Jozi Film Festival back for a second year in February, we wanted to find films which captured the ethos of curiosity and celebrated the uniqueness that the African continent has to offer. With a shortlist that includes films from Namibia, South Africa, Ghana, and Tanzania, we are confident that the top 10 once again represents this, and we look forward to broadcasting each film on Discovery Channel, and showcasing the many different ways these filmmakers celebrate Africa and the art of storytelling,” said Amanda Turnbull, VP & General Manager for Discovery Networks Middle East and Africa.

“The wealth of unique stories and creative subject matter our continent has to offer never fails to impress us here at the Jozi Film Festival, and we are delighted that through our partnership with Discovery Channel, we can once again provide African filmmakers the platform to showcase their creative storytelling to a wider audience. We hope the public gets behind the top 10 by voting for their favourite film and acknowledging the fantastic filmmaking talent we have across Africa,” said Lisa Henry, founder and organiser of the Jozi Film Festival. “A DAY IN TANDALE”, by Frank Papushika (Director) from Dar es Salaam, Tanzania

This film gives you a glimpse into everyday life and the people living in the region of Tandale in Tanzania. Frank said, “No words can express how I feel; I would like to thank you all for giving me this chance to be part of this experience. Winning is only half of it, the whole process is the other half. I feel honored to be among Top ten finalists this will be a turning point of my life.”

“THE LION AND THE HUNTER”, by Neil Jansson (Producer) from Johannesburg, South Africa The Lion and the Hunter is one man’s search to link the past and present in Limpopo South Africa. Neil said, “As a Passionate and Proud African, an opportunity to showcase a small part of our great continent is an honour and a privilege. A massive thank you to Discovery for the opportunity and a big thumbs up for the opportunity afforded to Creatives from Africa for the exceptional platform granted to tell our collective stories. I am super excited, in having being selected alongside other talented story tellers, in the top 10.”  From Tuesday, 31 July at 20:00 “THE WALK”, by Erlo Brown (Director) from Hermanus, South Africa The Walk follows a husband and wife team that decide to go on a wild walk that takes them along the coastline from the tip of Africa to the top of Namibia. Erlo said, “I feel extremely fortunate to have my work chosen as a finalist on such a prestigious stage. It gives me goose bumps to know that thousands of people will get to share in our story.”  From Thursday, 2 August at 20:00 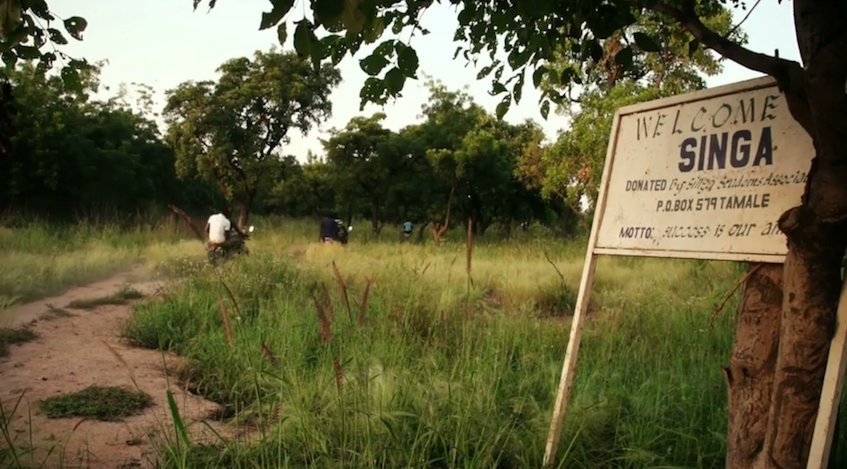 Drumming is an important customary practice in Dagbon culture, and it has been practiced since the 15th century when the Dagomba’s first settled in Ghana’s Northern Region. Akarema is the King’s own drummer who plays the Timpana to communicate to the King and the people of Dagbon. In this film, Akarema shares his experience of his role as the King’s drummer and that reveals the changes that has occurred in the role over the past centuries. John said, “The thought that Akarema has made it to the top ten is welcoming and heart-warming. Deep within, it’s a mixed feeling of excitement and hope, bearing in mind the commitment, passion and energy put into making this short documentary. Travelling over 1,200 miles up north of Ghana to experience and present to the world a drumming tradition of Dagbon is what is now being endorsed a worthy project.”  From Friday, 3 August at 20:00

“WE ARE HUMAN”, by Louise Kongolo Kanza (Director) from Johannesburg, South Africa Singabantu is an Afrophobia Awareness video shot in the remains of a house in Rosettenville, Johannesburg, South Africa that was set alight and burnt to the ground by disgruntled residents during service delivery protests that turned into Afrophobic attacks. The video stars a diverse group of African immigrant youth that share the daily plight they face being “foreigners” in South Africa. Louise said,“We are very excited to be selected as one of the Top 10 finalists for our short film #Singabantu – We Are Human. The film comes from a genuine, heartfelt place and we are grateful that more and more people get to see and be educated on the plight of migrants, refugees and asylum seekers not only in Africa but worldwide. The film continues to make waves internationally but nothing compares to recognition from our own continent.”  From Monday, 6 August at 20:00

50 years ago the Volkswinkel – the People’s Shop – opened for business in Rehoboth. The man behind the success story is Oom Land, and through this film you will get to meet him. Tim said, “It’s an incredible honour to be part of the Top 10 for a second year. Much like Oom Land himself, I believe you just have to keep moving, no matter what tomorrow may bring. When the tireless push forward is recognized, it recharges my batteries and prepares me for more cinematic adventures to come.”  From Tuesday, 7 August at 20:00

This touching story follows Amy McMillan who talks about her story, and how her family took inspiration from a tragedy to change the face of elephant conservation and awareness in South Africa. Didi said, “I am honoured to be selected as one of the top 10 finalists for the Don’t Stop Wondering competition! Thank you to Discovery for providing a fantastic opportunity and platform, where awareness can be spread about a story, family and cause so dear to my heart, and so closely aligned to the heart of Africa!”  From Wednesday, 8 August at 20:00

Budgeting for change explores the real life issues facing the people living in squalid conditions in on the margins of Ekurhuleni. Shot in KwaZenzele Informal Settlement, the film follows Molefe Mkhwebane who fights for daily survival and dignity in basic service provision in a country that set a goal to provide effective and equitable delivery of public services. Nkululeko said, “It’s a good feeling that issues of inadequate service delivery for marginalised communities are getting recognition on national and international platforms. Such recognition gives hope to communities that live in inhabitable conditions. All this work is a result of team work at Planact, Mr Molefe from KwaZenzele, the community leaders and the community at large. It is quite an honour that “Budgeting for Change” has been nominated to be broadcast on such a prestigious platform!” From Thursday, 9 August at 20:00

This is a narrative about how a young boy with distorted speech adversities, goes about living out his passion of coaching his own soccer team. Xolane said, “Nobody can really get used to the feeling of having your work considered and acknowledged by an audience. I am very grateful to have my film in the top ten, it shows that our stories do not go in vain. Because at the end of it all, it’s not really a matter of making films, it’s making films that matter. I hope Nqobile’s Story is enough to inspire!” From Friday, 10 August at 20:00

Each of these films will be broadcast on Discovery Channel four times throughout the voting period for your viewing pleasure. Voting opens at 11am on Monday, 30 July on the Discovery website www.discoverychannelafrica.com and closes at 7pm on Friday, 24 August.

WATCH THE FILMS AND VOTE NOW!

To celebrate the voting period, Discovery Channel is also airing a special Africa Month programming stunt throughout August, featuring a selection of the channel’s most popular shows filmed across the continent, such as Brent Owens: Extreme, Authentic & Unwrapped, A Taste of South Africa with Matt Tebbut, Deadliest South Africa and the brand-new series Hitched.

Don’t miss the opportunity to vote for your favourite upcoming African filmmakers and celebrate everything this amazing continent has to offer! Join the conversation on Twitter @discoverysa and by liking us on our Facebook page Discovery Channel South Africa, using #dontstopwondering and #JFF2018.

Investing costs have never been this cheap!

Congrats to the winners of the EasyEquities/Pablo Clark Maranello Competition