It’s wonderful to make connections, and it’s something we do really well at CN&CO. With the right links, and a generous dose of good old common sense, really amazing things can happen.

Take Ann Roberts, for example, a.k.a. Ann of Many Hats, a.k.a. ann@manyhats.co.za. Ann met CN&CO’s Carel Nolte through Business and Art South Africa (BASA). They clicked instantly and became good friends. Ann has done – and still does – some really, really interesting and amazing things in the broader world of “the arts”. During her difficult-to-define career, she has worked or crossed paths with luminaries such as Die Antwoord, Rian Malan, Trevor Noah and – long story – Quentin Tarantino. Speaking at CN&CO’s Feb 2017 ConFab, Ann shared her favourite philosophies about work and life, and also recounted some hilarious stories about working with “pure creatives”.

At various stages in her career, which has included 25 years of making TV commercials and another seven years of wearing many hats, Ann has helped countless artists and other creative types to put food on the table.

“Often all they need is someone to do the paperwork,” she says. “There are so many artists – including musicians, actors and “pure creatives” – who just can’t get that stuff done. They need someone, literally, to download the forms, fill them in and submit them.”

They also need people to represent their commercial interests.

“Pure creativity doesn’t come in neat, saleable packages,” says Ann. “Creatives are often not nice people, or easy to manage. They don’t fit the mould in terms of corporate meetings and proposals and the like. So they need people like us to serve as a buffer.”

Ann told some fascinating stories that positioned “doing business” in a whole new light for many ConFab guests. Her company, for example, would often hire a person purely as a muse.

“We hired or invited many creative people into our company to bring cool stuff into our lives and stimulate our working environment,” she explains. “At one point in time we had a whole bunch of stand-up comedians based in our offices. They needed a place to work and we were delighted to have them.

“Having access to a resource like that, right in your space, for you to bounce things off and come up with ideas was of real value to the company. They brought an amazing energy that we were all able to tap into. At the same time, they had a place to meet. They were really battling, literally not knowing where their next meals were coming from. So we were able to help each other, even though there’s no ‘traditional’ name for the relationship that we had.” 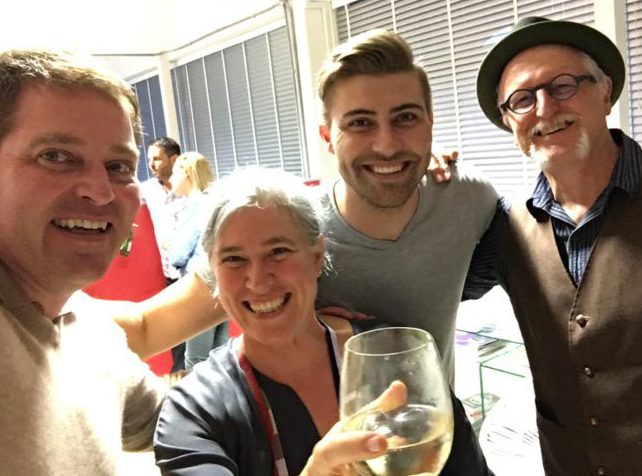 At the time, Ann and her muso husband, Dan, were working on a project called Radio Kalahari Orkes with, among other people, author / journalist / documentarist / songwriter Rian Malan. Rian, in turn, was roving editor for Esquire magazine, and a regular contributor to illustrious publications such as the Washington Post and the Wall Street Journal.

When Ann introduced Rian to the comedians, he said, “That’s a great story. Let me send something to Wall Street Journal.”

“Next thing, Loyiso Gola, Trevor Noah, David Kibuuka and Kagiso Lediga were on page one of the Wall Street Journal!” says Ann. “I like to think that making those connections can have a significant impact on lives or careers, and even the national discourse – I mean, look at where Trevor Noah is today!”

And here’s another connection: Through their association with the music world, the members of Die Antwoord stayed with the Roberts family while they were busy becoming famous. In fact, Ann and Dan’s daughter Lily inadvertently came up with the phrase “I think you’re freaky… but I like you a lot”, which was the inspiration behind the hit single I Fink U Freeky. Lily, now almost 12 years old, puts all her royalty money from the song into an EasyEquities account to save for her future.

Given that what Ann does (and, to a certain extent, what we do at CN&CO) is not traditional work, it’s difficult to plot a pathway to success.

“My CV will never respond to a normal brief in the world,” she says. “An old mentor once told me that the best thing I can do to find things to do is to talk to people. ‘Activate your networks,’ he said. That’s probably the best bit of advice I have ever received.

“It’s like when you’re creating a work of art, you can never imagine what the end product will look like. You have to just start it. And then it talks back to you. It becomes a conversation between you and the work, until somewhere along the journey you figure it out and end reveals itself. And then you know.

“All you have to do it start! If you’re too scared to start because you can’t see the end, then you’re doomed to stay where you are forever.”

Ann makes a huge difference in the art world, even though she doesn’t have an easy-to-define job. Notwithstanding the contribution she has made to the portrait campaigns for our clients Purple Group and Standard Bank Wealth and Investments, she also runs successful, regular pop-up shops that sell prints by amazing local artists.

“Not everyone wants to go to a gallery to buy good art,” she says. “Our pop-up shops allow art fans to choose from a selection of great prints, at very affordable prices, in a non-intimidating environment where they can bring their kids, have a glass of wine and browse for stuff they like. There’s no pressure or expectation. Just good art and nice people.

“There’s almost a requirement from the galleries that keeps it all ‘artybollocks’ and inaccessible. It’s almost like you’re not really supposed to understand what it’s all about because it’s SOOO clever. But it needs to be more accessible. Art can start important conversations on so many levels.” Ann is also part of the team that’s putting together the South African Pavilion at the upcoming Venice Biennale.

“We have a couple of amazing South African artists lined up, Candice Breitz and Mohau Modisakeng, who I have no doubt will represent our country supremely well,” she says. “I have never been involved in anything like this before, so it’s all new to me… which means it’s going to be completely different from anything we’ve ever seen before.”

There are also still loads of sponsorship opportunities for South African companies who want to get involved.

“We’re going to be doing some really exciting and amazing things. The more people we have on board, the better!”

Ann says people who are in it to get something out of it should probably steer clear of this type of work.

“You shouldn’t go into these things thinking, ‘What am I getting out of it?’. You should do things that feel like they need to be done. That’s probably why I do what I do – there’s something that feels like it needs to be done.”

CN&CO’s ConFab sessions are all about celebrating links and connecting people who might otherwise not have met. Our Feb 2017 ConFab guest list included an artist, a musician, a property developer, a banker, an insurance regulator and a whole lot of other people in between.

“It’s all about connections,” says Carel. “When you put a bunch of disparate people in a room together, it’s amazing what can happen.”