The award-winning documentary feature film A Billion Lives, which has been capturing headlines at international film festivals, will have its African premiere at the fifth annual Jozi Film Festival (JFF).

Igniting controversy about how anti-smoking forces are attacking the vaping industry, A Billion Lives exposes how pharmaceutical companies, anti-smoking advocacy groups, tobacco companies, and governments around the world are to blame for disinformation, over-regulation, and banning of vapour technologies. 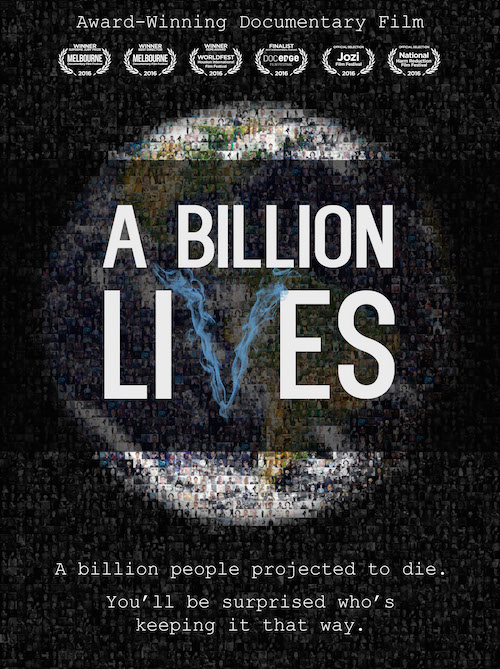 The film’s director and executive producer, Aaron Biebert, travelled across four continents to discover why a device that can save so many lives is maligned and discredited in so many countries. He was shocked to discover that a billion people were projected to die from smoking during the current century, and that big business and allied government interests were interfering with the marketing and distribution of an inexpensive, drug-free alternative that scientific studies have shown is successful in the cessation of smoking. Telling this story is what A Billion Lives is all about.

“With smoking rates climbing in Africa faster than the rest of the world, the truth about safer alternatives to cigarettes has never been more important,” says Aaron,who will be in Johannesburg for the film’s first screening on the continent. “I am excited and proud to have our African premiere at Jozi Film Festival. It’s time to get the truth out there before it’s too late.”

More than 40-million people worldwide are using vapour technology, with many employing it as a means to successfully quit smoking. But, as the film argues, with billions in profits and taxes at stake, corporate conglomerates and the governments they benefit have created a multi-pronged campaign to poison the global population’s attitude against the use of this innovative technology in an attempt to crush the potentially life-saving emergence of a smoke-free, prescription-free alternative. These acts, in essence, are sentencing a billion people to die needlessly from cigarettes in this century by placing barriers to a low cost, successful substitute.

“We are very proud to be screening this eye-opening and oftentimes shocking film at this year’s festival. Biebert’s documentary ensures that the facts speak for themselves – when you leave the cinema after this film, you will think differently about vaping and the e-cigarette industry,” says JFF’s Lisa Henry.

The film screens at Rosebank’s Cinema Nouveau on Friday 16 September at 8pm (pre-screening event from 7:00pm, Q&A with the director to follow screening) and again on Sunday 18 September at 5pm. Tickets are available from Ster Kinekor. Book here.

CN&CO is a proud partner of the Fifth Annual Jozi Film Festival, which takes place from 15-18 September 2016,. The festival highlights the best in filmmaking, presenting a multi-genre slate of films from emerging and established filmmakers, exploring a broad range of topics that affect our communities and stir our hearts and minds. An exciting lineup of South African and international films will be screened over a three-day period at several venues throughout the city, including The Bioscope Independent Cinema in downtown Jozi, Ster Kinekor Cinema Nouveau Rosebank and the Eyethu Lifestyle Centre in Soweto.

Two days of Film Industry Talks, in partnership with AFDA, will also be taking place at the Goethe Institut on Jan Smuts Avenue on 17 and 18 September.

See below for other films that will be screened at the festival:

Call for submissions for the 9th Annual Jozi Film Festival