Hundreds of portraits in seven days When the CEO of the wealth & investment division of a large global bank asks you to get hundreds of individual portraits of its staff, worldwide, commissioned and delivered within seven days, you’d be forgiven for having a slight panic attack. And while some might say “that’s impossible!” others may say “challenge accepted!”

The latter was the obvious response from CN&CO, where our passion and skills lie in anything to do with people and brand – especially if we can work in financial services and the arts as well!

“CN&CO confidently took up the challenge,” says CN&CO MD Gianluca Tucci. “After all, the world was created in seven days, so why not this?”

Firm believers in the power of collaboration, CN&CO teamed up with Ann Roberts and Business and Arts South Africa (BASA) to get the portraits done within the seven-day deadline. More than 40 South African artists, each with their own style and approach to art, were identified through the BASA and CN&CO networks to collaborate on this campaign.

“The first challenge was getting the 200x200mm canvases, along with the images of the team members, to the artists – who are scattered around the country,” says Rob Christian, CN&CO’s chief engineer. “Artists were given carte blanche to use whatever style and medium tickled their fancy, as long as they resembled the subjects (obviously).”

“The bank places great importance on relationships and bespoke offerings to their clientele, with attention to detail in all that they do,” says Gianluca. “They realise that no two people are alike. The same can be said for portraits and the individual style of each artist who creates them.”

By 25 November 2015, all of the portraits had been distributed to the bank’s offices in Johannesburg, Cape Town, Port Elizabeth, Durban, Pietermaritzburg, Jersey, London, Nigeria, Mauritius, and Kenya – in time for the internal launch of the company’s awesome new vision (which will be revealed in due course).

The bank in question is a proud member of BASA and a massive supporter of the arts in South Africa. CN&CO also has strong connections with BASA, both as a corporate member and through Carel, who serves on the BASA board. 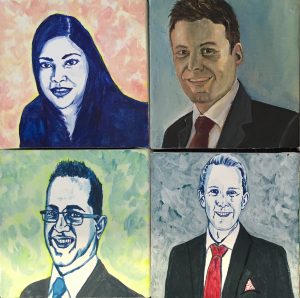 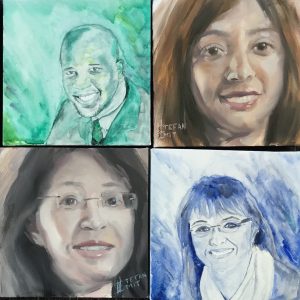